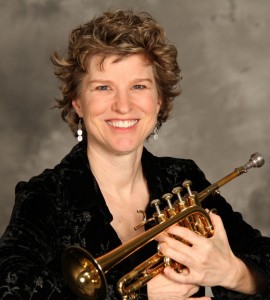 Yvonne Toll is one of Atlanta’s premier trumpet performers and instructors. She has been in high demand as a freelance musician since moving to the Atlanta area in 1988. She received her undergraduate degree from North Park College in Chicago and the Masters of Music from the Eastman School of Music, where she was awarded the prestigious Performers Certificate.

Ms. Toll joined the Atlanta Opera in 1996 and was appointed Principal Trumpet in 1997. She can be heard several times a year performing with the Atlanta Symphony and the Atlanta Ballet as an extra musician. As well as performing symphonic and solo work, Ms. Toll might be seen in the orchestra pit for various Broadway Shows or Musicals performed in the Atlanta area.

In addition to her performing schedule, Ms. Toll maintains a teaching studio of students ranging in age from 8 to 83. Most recently she has been appointed Instructor of Trumpet at Clayton State University. While living in the Atlanta area, she has taught trumpet at Georgia State University, Columbus State University, Agnes Scott College, Georgia Perimeter College, and Emory University. Her students have achieved full-time music careers as middle and high school band directors, free-lancers, business owners, managers,and recording engineers. When not practicing, she enjoys cycling, running, woodworking, rock climbing, triathlons, and playing with her dog Scout.